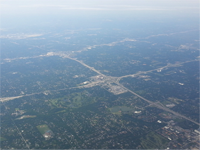 We offer the following in Creve Coeur, MO

About Creve Coeur, MO - Happy to be your hometown Heating & Air Conditioning Contractor!

Situated in west St. Louis County, Creve Coeur is a thriving city with an estimated population of more than 17,900 residents. It shares a ZIP code and borders with the nearby city of Town and County, and houses the headquarters of Monsanto, an American multinational agricultural and agrochemical biotechnology corporation.

French explorers were among the first inhabitants of Creve Coeur who began fishing and farming in the early 18th Century. Fur trappers came to the area in the early 19th Century.  After the Louisiana Purchase in 1803, the area was acquired by the United States and the Louis and Clark Expedition came through the unincorporated community.

Fast forward to 1950, St. Louis reached its peak population with more than 856,000 people filling up the city to the brim. This forced the returning soldiers of the American Civil War to search for housing in St. Louis County - they wanted bigger houses, places to park their new cars and more yard space.  The construction of Highways 40 and 270, along with the technological advancements in the automobile industry, pushed the movement westwards away from the city.

Creve Coeur, which was incorporated in 1949, had a housed population of only 19,000 residents and provided the perfect atmosphere to raise their families. As of today, the city of Creve Coeur is a thriving community with a number of high-tech office parks, hundreds of businesses, acres of parkland and beautiful homes.

The city is home to two public district schools, two private collages, five private primary schools, five private high schools and fifteen houses of worship - it’s a place where residents can find everything they need no more than ten minutes away. Covenant Theological Seminary along with Missouri Baptist University are also located within Creve Coeur.

Furthermore, one of the city’s main attractions is its park system, which consists of seven parks spanning across 95 acres of land. It includes historic homes, tennis courts, playgrounds as well as many walking trails. While Creve Coeur is still home to cabins that are over 200 years old, the construction of U.S Route 40 and Interstate 270 has speeded up expansion.

The city receives 42 inches of rainfall and 26 inches of snowfall per year. With the average high in summers around 89 degrees, having a reliable air conditioning system is important to maintain a cool temperature in your home. Moreover, since the mercury drops as low as 22 in the winters, installing a heat pump becomes essential to keep your home nice and warm throughout the season.