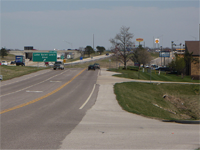 We offer the following in Lake St. Louis, MO

Situated near two lakes between highway Interstate 64 and Interstate 70, Lake St. Louis is a planned community in western St. Charles County, Missouri. It has an estimated population of more than 15,500 residents. Lake St. Louis is a suburb of St. Louis and offers some of the finest commercial and residential amenities in the region.

Envisioned by developer R.T Crow, Lake St. Louis began as a private recreational lake community in 1966. After the declarations of covenants and restrictions of Lake St. Louis was signed and recorded by June of 1967, the city experienced massive development. By 1969, Lake Ste. Louise - the 85 acre 9-hole, 3-par golf course - opened its doors.

The dam for the 600-acre Lake St. Louis was completed by 1972, and a second bridge was added over the Missouri River later the same year. In 1975, the boundaries of Lake St. Louis were expanded to include what’s now the westernmost portion of the city. In 1977, under the Revised Statues of Missouri, Lake St. Louis became a fourth class city, with Howard Haddock elected as the first mayor.

As of today, the city of Lake St. Louis offers world-class municipal services to its residents, including building inspection and code enforcement, police, snow removal, parks, community development, public works and municipal court. The Civic Center, which houses the City Hall and Lake St. Louis Police Department, also serves the residents of the city.  Some of the best recreational facilities are offered in the St. Louis region.

Three shopping centers provide plenty of options when it comes to shopping, and in addition to having one of the best school systems, there are many other attractions available in the fast growing city of Lake St. Louis,  including the National Equestrian Center, the Family Arena as well as minor league baseball.

The diversity and high quality of housing, well-planned commercial and residential areas, as well as the variety and abundance of recreational facilities, speaks volumes about the city’s planned community environment. Therefore, it doesn’t come as a surprise that more and more people are deciding to move to the city.

The city receives 43 inches of rainfall and 13 inches of snowfall per year. With the average high in summers around 87 degrees, installing an air conditioning system is crucial to keep your home cool. Moreover, since the mercury drops as low as 21 in the winters, it’s highly recommended that you invest in a heat pump to keep your home comfortably warm.